Lovely feature article written on me by the talented David James for The Marlborough Express. Have a read! https://www.stuff.co.nz/entertainment/arts/100896789/New-spaces-new-faces-new-era-for-Picton-artist-Rebekah-Codlin 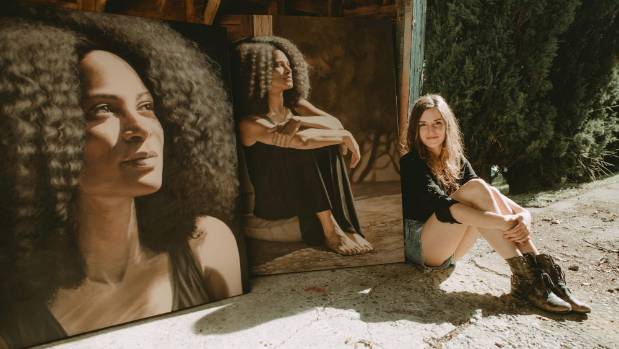 DAVID JAMES/STUFF Artist Rebekah Codlin in a single-car garage in Picton, that will one day be her new studio.

Even if you are just a teensy-weensy bit arty, or interested in art, and live in Marlborough, you will have heard the name Rebekah Codlin.

The young artist burst onto the scene seven years ago, at the age of 17, with her stunningly detailed and emotional oil paintings of local faces and friends.

Her talent got her noticed in Marlborough, selling one those early portraits for $10,000. 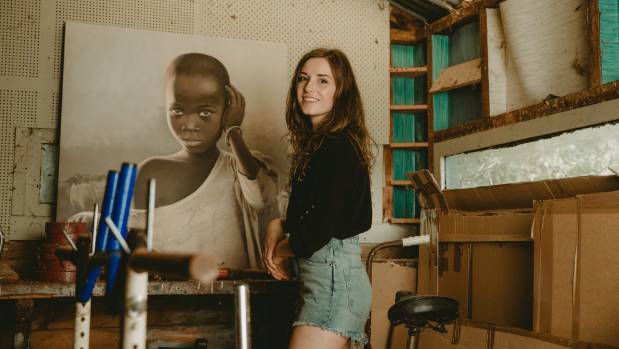 DAVID JAMES/STUFF Rebekah Codlin garnered a lot of attention early in her career for her portraits of young African children.

National radio and television interviews, or ‘um-terviews’ as she calls them, constantly lost for words, soon followed.

But that was then, this is now. The young Picton woman has had a lot of growing up to do as a working artist.

Codlin, 24, is known to many for her portraits of young African children staring meaningfully, and hopefully, into the lens of the artist’s eye. 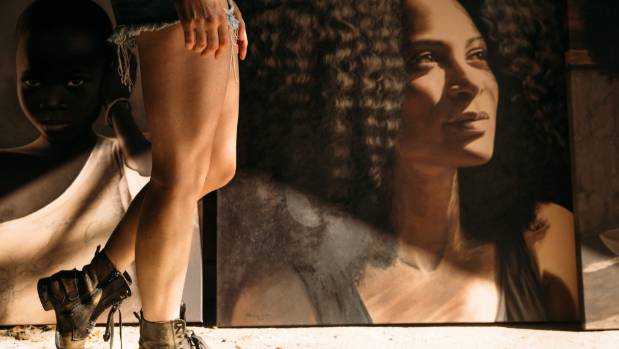 DAVID JAMES/STUFF Rebekah Codlin says she is “inspired” by her garage, and the natural light that pours in.

But at the end of this year, Codlin plans on making the move to Santa Fe, New Mexico, where she will work as an artist in residence for a new gallery in the United States.

“I met the director’s family [of the Santa Fe gallery] when I was in Hawaii a year ago,” Codlin says. “He’s an artist too, which is exciting.”

“And recently I’ve been contacted by several UK galleries for representation … so it’s looking like I will need to get cracking on a body of works for those.”

Turns out there’s a lot going on in the artist’s life for which she as reason to be grateful.

And apart from being represented very well by The Gallery Havelock in Marlborough, she has signed to two more galleries in New Zealand – the Black Door in Parnell, Auckland and Central Art Queenstown.

“I had been completely independent for six years, so gallery representation was something I had been turning down over this time, but I’ve decided lately to try something new and different for me,” Codlin says.

Codlin still works six days a week, 10 hours a day, which includes not just painting but keeping up with inquiries, social media marketing, packaging prints and paintings to post, and photographing new subjects to paint as she moves away from the African series she’s known for, and back to the faces around her.

Maturing as an artist has also meant growing up as a young adult whose day job is not like many others. Codlin says she’s learned to start listening to her heart, while shutting out the expectations from the big bad art world.

“I’ve learned to slow down a little more … And being conscious to listen to what really inspires me, and not the current art trends, or to target a market.

“People seem to really love the art I personally enjoy painting the most, and this is such a wonderful thing I now feel I can relax about and just do.

“Right now, I am putting much more importance on balancing my life, chilling a bit and not rushing so much – doing what I know is right more, rather than knee-jerk decisions.

“I am focusing a lot on dancing now actually and I am loving it. It actually really helps with my art as well as I use the same ‘mindset’, I suppose you could call it.”

For her popular African series, Codlin worked closely with a German photographer who travelled to villages taking pictures of young African children, sending the photos to Codlin to use as subjects for her work.

They are real people with real lives, with Codlin adding her own original voice to the final image.

“[The photographer] has been able to capture some gorgeous ‘paintable’ people. I asked to use some of his photos as inspiration for my works … almost always I end up changing aspects of the works to capture the feeling I’m wanting to come across, this might include adding face paint or jewellery that wasn’t in the photo and changing expressions and lighting.

“I love hearing of the places he visits and what the people are like, and their lifestyles.”

Right now, Codlin is planning on turning an old single-car garage in Picton into her gallery where she will work before moving to Santa Fe.

“I’m inspired by my garage, and the beautiful natural light that pours in, this is where I’ve been doing photographs of my subjects lately. You can see it in my ‘Charlie’ paintings.

“Ironically it will soon become my studio, so will lose a lot of its rustic appeal, oh well, that will be the end of an era and the start of a new one I suppose.”

Be the first to hear about my new originals, prints and sales. Unsubscribe at any time.